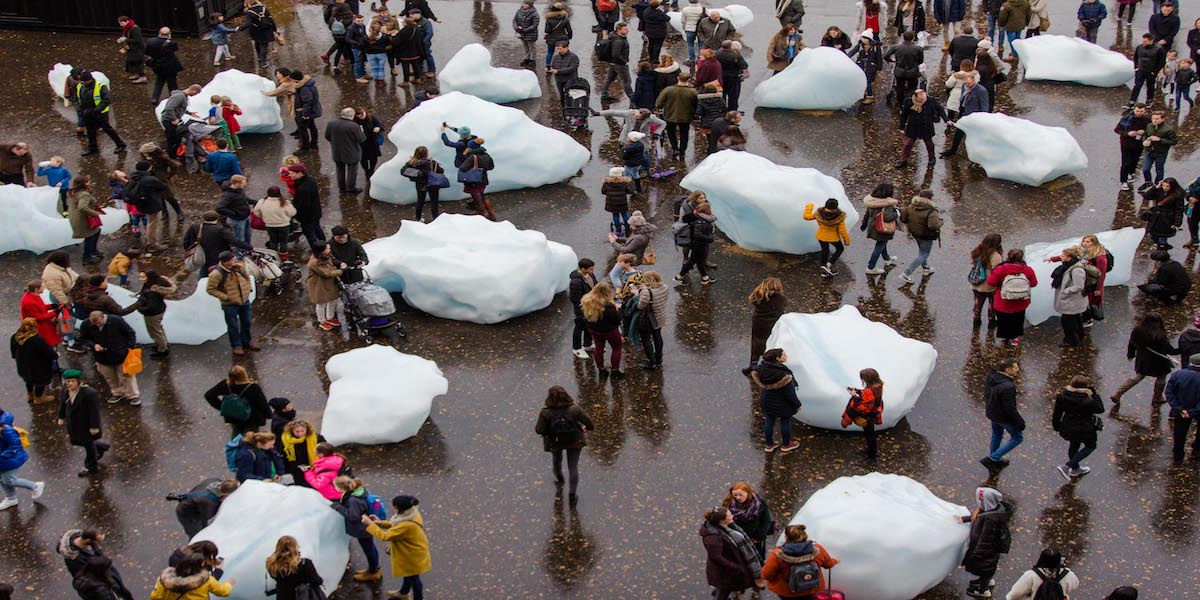 These are the words of Iceland’s Prime Minister, as climate change begins to seep beneath the country’s glaciers and turn them to water. In 2018, in the midst of the urban jungle, twelve boulders of ice travelled all the way from Greenland to reside in a circle outside the Tate Modern, until the day they fully melted. The circle formation resembled the ticking imminence of a clock, the intimate space of a campfire, a little parliament of ice having to make an important decision. The installation ‘Ice Watch’ stemmed from a collaboration between artist Olafur Eliasson and scientist Minik Rosing, planted firstly in Copenhagen then in Paris and London, to raise awareness of climate change.

The blocks had been cast off and harvested from a fjord near Nuuk, where they had already been lost from the ice sheet, before being sent to London as the testimonies of melting arctic ice. During their brief decaying life, many citizens paid a visit, touched and engaged with them in many different ways. The primary aim of this installation, in the artist’s words, was to contextualise the cold facts of the climate crisis in a public space and generate small physical dialogues, literally breaking the ice that lies between our disengaged attitude and the imminence of the issue. The clarity of the ice itself, in fact, was used as a raw material to communicate through crackling sounds, a wet surface or a luminous slab what is often translated into a science of numbers. By rediscovering the beauty of what is being lost, we can move empathy and create positive engagement. 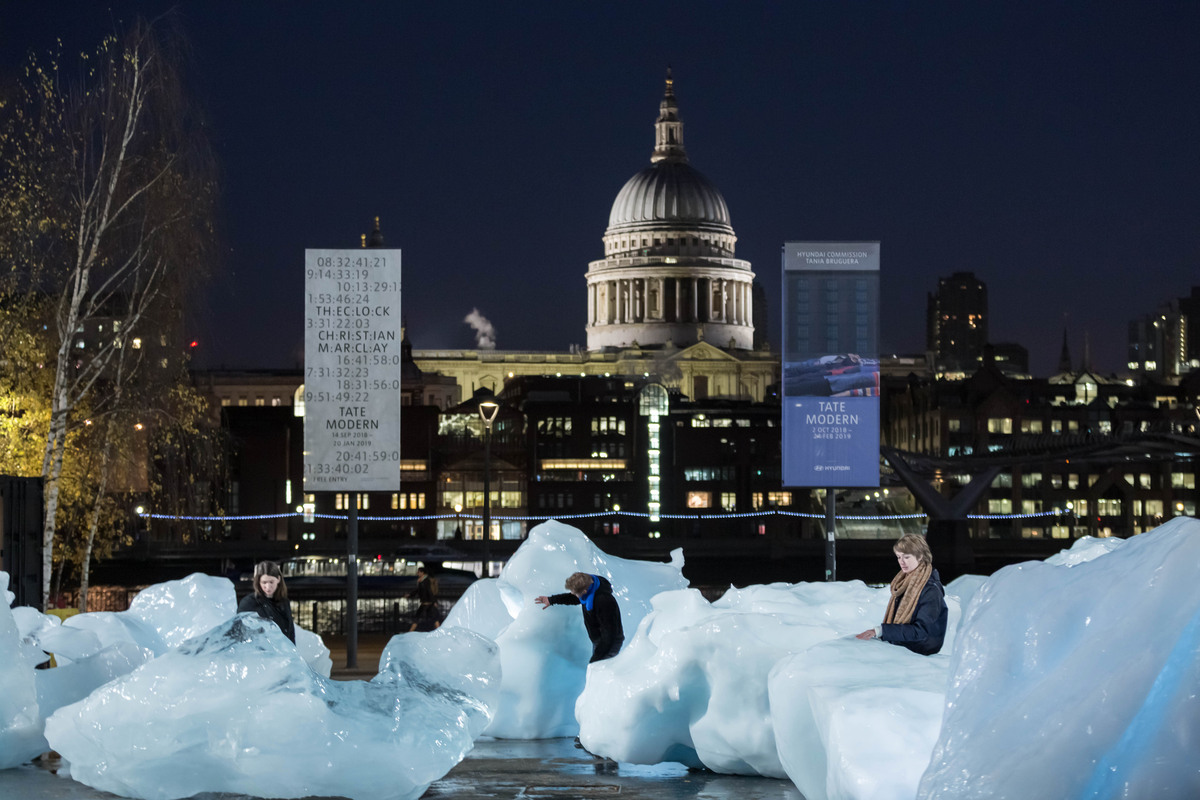 Olafur Eliassons’s artistic commitment to the breaking landscape however stretches further back into the past. In 1999, the artist had captured several dozen glaciers in Iceland, to document this natural phenomenon in a series called ‘the glacier series’. The awe-inspiring geology of the country and the greatness of the glaciers appeared eternal and untouchable by the futility of human time. Twenty years later, Eliasson decided to return and capture the same glaciers again, from the same perspective. The contrast was dramatic: in fact, he decided to bring it together in a collection of photographs entitled ‘the glacier melt series 1999/2019’, where thirty pairs of images speak of the silent yet present tragedy of global warming. The same immobile and solid glaciers from twenty years earlier had moved throughout time, some even becoming difficult to find again. Although aware of the incumbent warming, the artist recounts the bewildering shock of being faced with the fragility of decaying glacier ice which, unlike sea ice, once melted is gone forever. In these photographs, the impact of human actions is measured against an unexpected extent of environmental change: they make it clear that our actions have the power to move mountains or dissolve glaciers. The bridge between the twenty years that separate each couple of glaciers is represented by our shared responsibility: the consequences of our choices are made felt through the landscape that surrounds us. Every lost glacier represents the blindness of human activity which refuses to open its eyes and offer its hand. Every saved glacier speaks for the triumph of hope and the turning of humans into custodians.

In one of Eliasson’s latest projects, Earth Speakr, the fundamental communicators of ecological change become the children: through an app and interactive website which makes use of augmented reality, they are able to record their ideas regarding the wellbeing of our planet and share them with others. Through this portal, adults in particular are invited to listen to the voices of empowered kids and open themselves to receive the message of those who will be directly affected by the climate struggles we are already starting to face today. In this way, we are able to reflect ourselves in the children of the present, innocent and hopeful, as they incarnate an essential antidote to our glacial perspectives.

The survival of the ice, along with that of life on earth, can only represent one thing: that the bridge between knowledge and action has been crossed in the shoes of responsibility. The day we will have redefined our spatial contract and included within our moral landscape the very grounds we stand upon, will be the day we can offer our true legacy of hope to the generations to come. 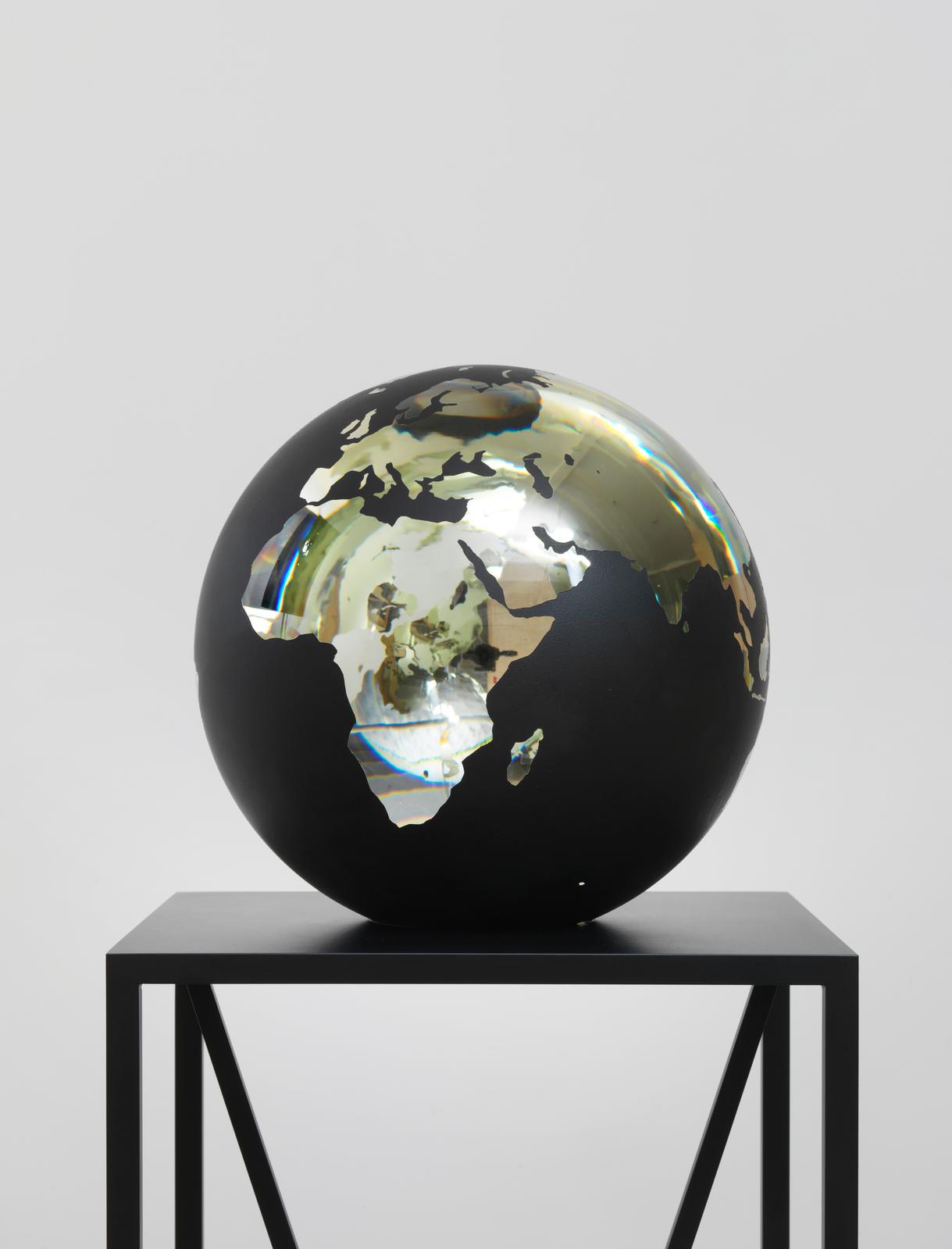