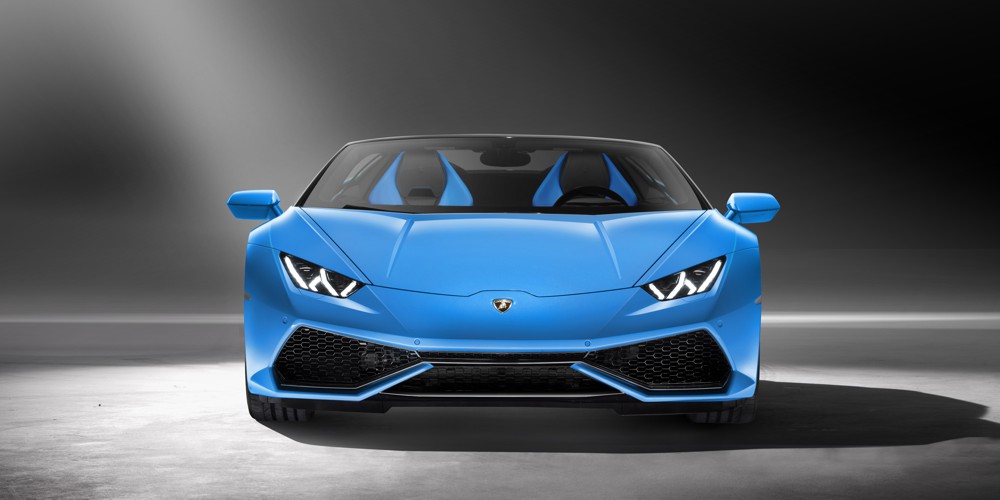 Exclusively for Shot Magazine, our Driver Federico Crozzolo flew to Sweden to see and try out the new Lamborghini Huracàn which was officially presented at the last round of the Swedish GT.

Like most of the names that represent Lamborghini models, the Huracàn has also been tagged in the same light and inspired by the world of bullfighting. The Spanish fighting bull Huracàn breed "Conte de la Patilla" became famous for his extraordinary courage and strength when he fought in August of 1879 in Alicante, where he remained undefeated thus becoming the legend of the Corrida bulls.
As explained by the CEO of Lamborghini, Stephan Winkelmann, the new Huracan LP610-4 has a heavy legacy to follow, that of the famous Gallardo model that has brought success and significant growth in terms of turnover for the automobile headquarters of Sant'Agata Bolognese, with its 14,022 units delivered from 2003 up until today.
For this precise reason, Lamborghini has preferred to play it safe and keep a few basic concepts, even the fact that the Huracàn is a coupè/spyder, a two-seater high-performance car, with a ten-cylinder longitudinal rear mounted position V engine (hence the initials LP), increased horse power which is now 610, while being Euro 6 approved and boasting lower consumption. These results have been achieved by thoroughly revising the heads and camshafts, and especially with a new intelligent electronic system in the management of the injection.
What is a momentous step forward, is the body and its sporty design. The Lamborghini designers have managed it, the difficult task of creating a car worthy of the symbol of the determination of a bull fighter, but at the same time, very elegant and well proportioned. With the new streamlined design, it dramatically improves the Huracàn's efficiency of the force of the air speed in pushing towards the ground, gaining even a 50% more grip than the heir Gallardo.
In short, we really liked the new Huracàn alot, and the market is saying the exact same thing with a list of about 1500 orders by expectant enthusiasts who can spend 220,000 euros that have already ordered "sight unseen".
Among the other important news about the new Huracàn is certainly to emphasize the gear change, a seven-speed dual-clutch gearbox has finally arrived in a Lamborghini, fast and precise at first impression driving, that replaces the brutal, and let me tell you, a little ' slow, robotic gearbox of the Gallardo. The traction, as a Lamborghini tradition is always all-wheel drive, but the hydraulic coupling has been replaced with a new system with an electronically controlled clutch which allows torque transmission which is much more linear and advanced with respect to the loss of adhesion.

Interestingly, while in "Street" mode the distribution of the four-wheel drive favours a more reassuring behaviour (ie, the grip limit is exceeded from the front wheels first, which tends to widen the trajectory), and in "Sport" mode, is unbalanced almost all the way to the rear (to make skid "power" possible), while in "Race" is a middle way choice, to obtain a more balanced car as possible (so as to encourage maximum cornering speed). Actually, the Lamborghini Huracàn, rapid and precise in the corners and with a stability control ready to perform on what I has to do, has a limit of grip and traction which is so high that, in the dry, can travel "on track" with any setting, even at high speeds. For almost a year after the launch of the Huracàn Coupe version, at the 2015 Frankfurt Motor Show, Lamborghini officially launched the Spyder version.
In essence, the Spyder offers the technical content of the Huracàn LP610-4 model year 2016, with the presence of the soft top available in three colours: black, brown and red, with lines that are clearly different from those of the coupe version. The Capote opens with a button located on the centre tunnel in just 17 seconds and can be raised on the move, up to 50 km / h. Regardless of the position of Capote, the driver can electrically raise the rear window, which acts as a wind-shield if raised, or amplifies the sound of the V10 engine when lowered.
In the new Huracàn version, in the roof open position, two special flaps emerge from the compartment in which the soft top folds into and grafted up to the seat backrests have been developed. This is for greater aerodynamic efficiency and the best aesthetic effect.
The new Lamborghini Huracàn Spyder will be offered with a starting price of 186,450 euros excluding tax and will arrive to the first customers starting in spring 2016. 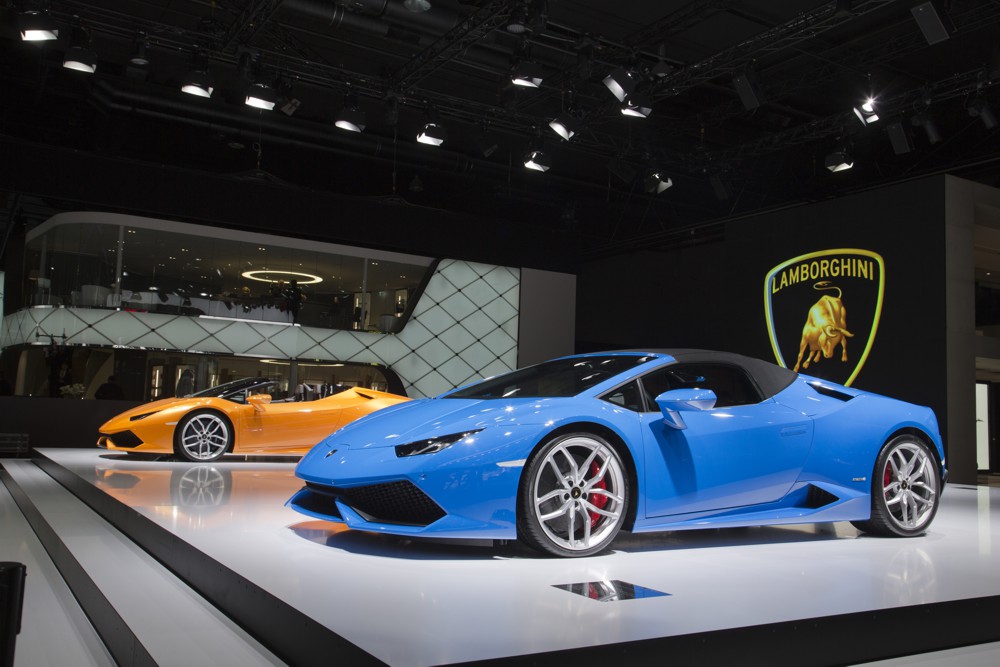 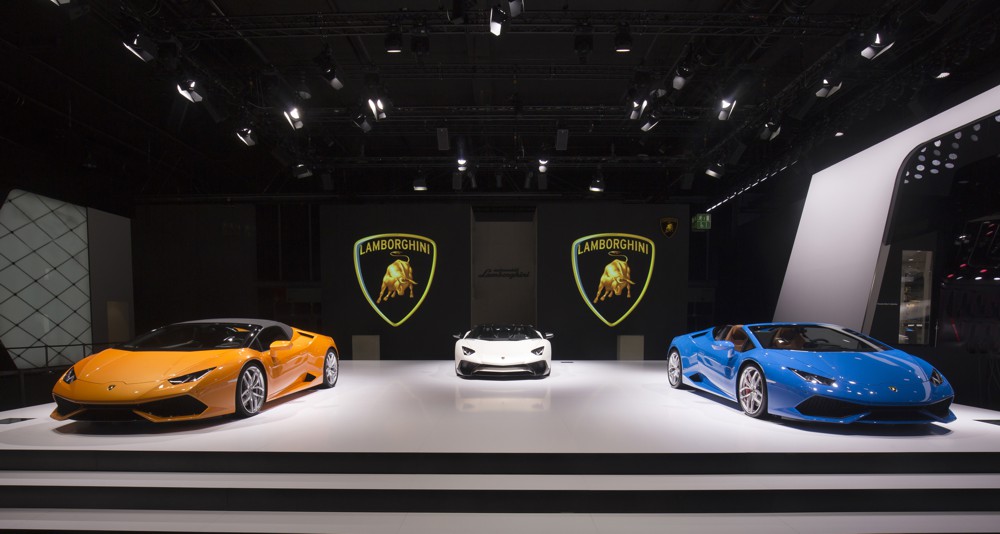 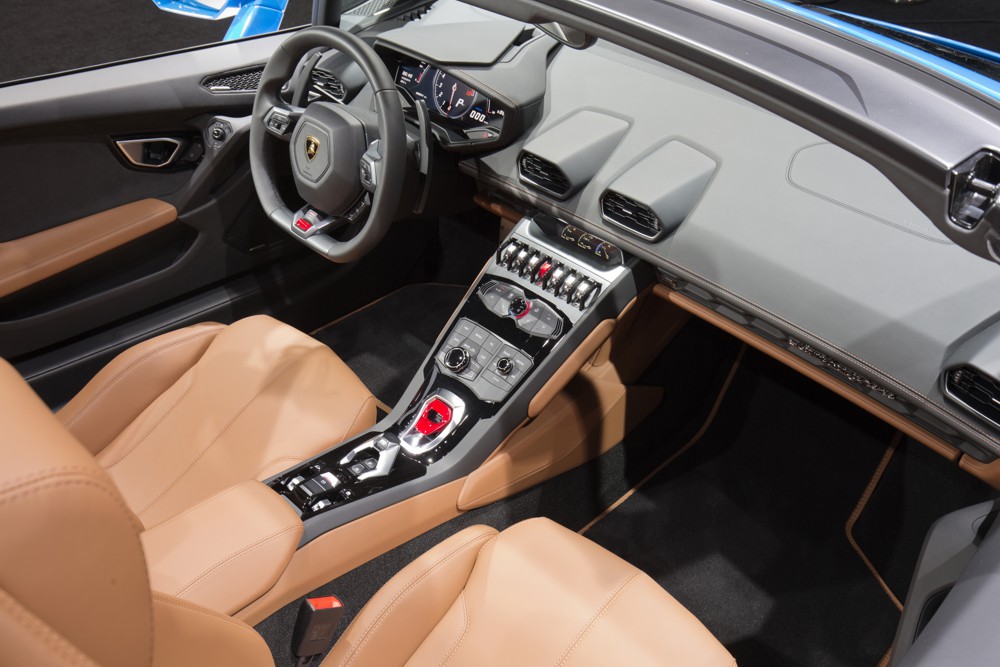 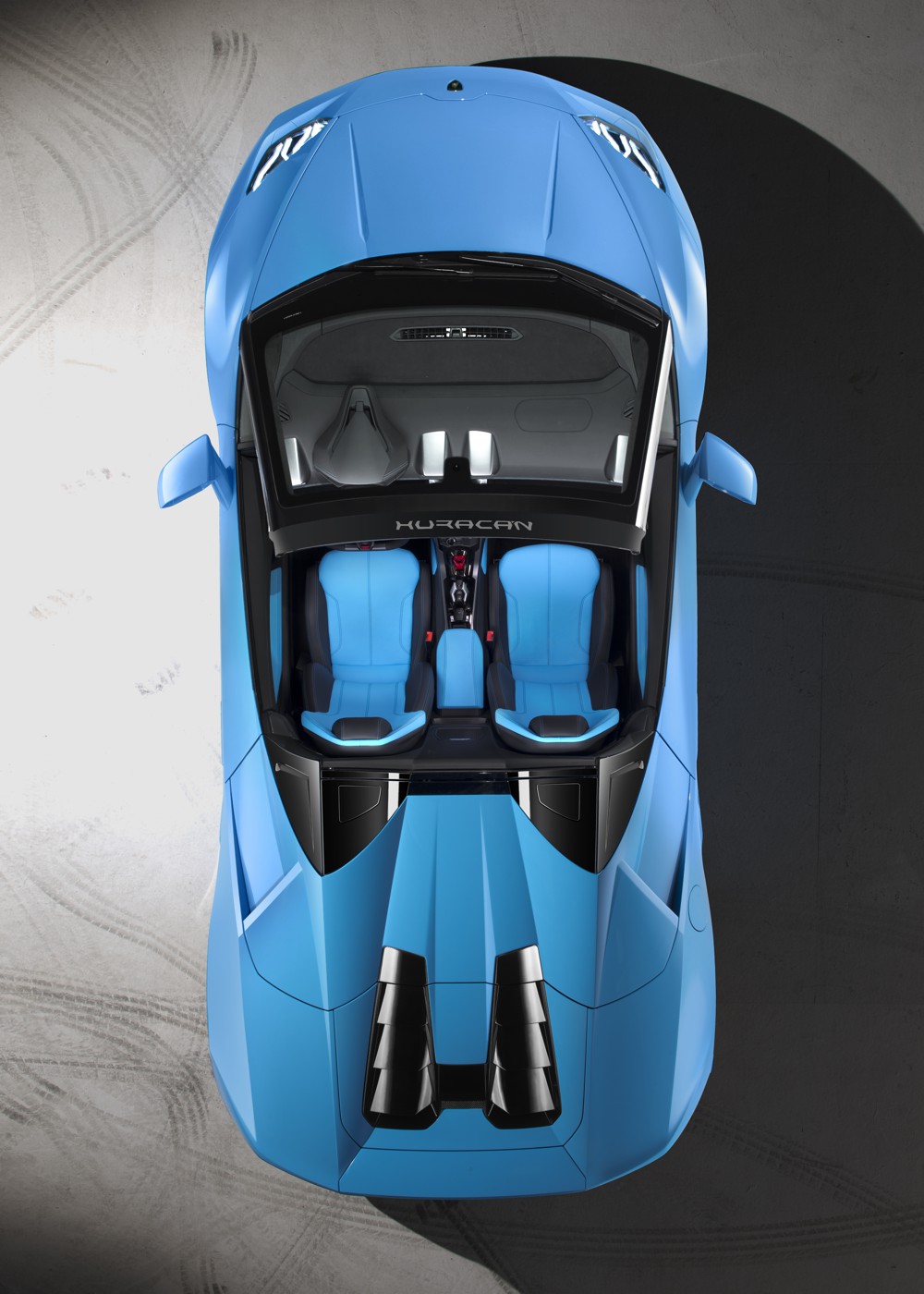