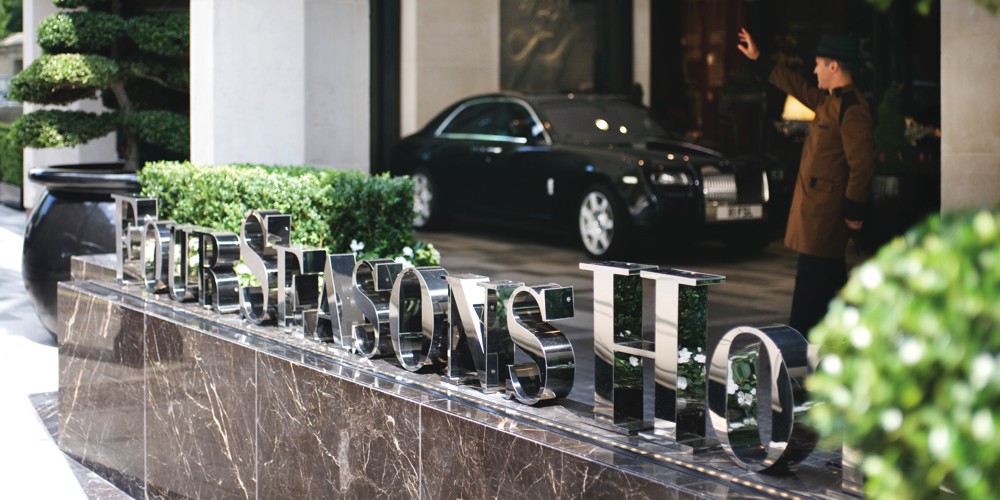 THE BIRTH OF AN IDEA
On the site of the original Four Seasons Inn on the Park – the company's first European Hotel – opened in 1970.
In the late 1960s, a young hotelier named Isadore Sharp spent several years developing a hotel in London.

It would be his fledgling company's fourth location, and its first in Europe. During the years he spent flying back and forth from his home in Toronto, Canada and staying in London hotels, he had a lot of time to think about what he wanted for his hotel company, and also what he wanted as a hotel guest. By the time the Inn on the Park opened in January 1970, an idea had taken shape: Four Seasons was going to be a company that didn't just respond to travellers' needs, but actually anticipated them. Sharp adopted the Golden Rule as the founding philosophy of what would become the world's leading luxury hotel brand. “Treat others as you would like to be treated yourself” is the mantra that every employee in every one of more than 90 hotels and resorts around the world lives by each and every day. London is also where Four Seasons first introduced many of its signature innovations, from complimentary toiletries and multiple phones in rooms, to overnight laundry and one-hour pressing, to 24-hour business centres. Today, on the site of the original Inn on the Park, the new Four Seasons Hotel London at Park Lane emerged in time to mark the company's 50th anniversary. Now that's truly golden.

HYDE PARK
Guests wandering around Four Seasons Hotel London at Park Lane might notice hunting and equestrian references throughout the interior design touches of the Hotel, from the bronze statue of a big cat tussling with its prey on the first floor to the beautiful paintings of majestic horses on the walls of the stairs.
The link between the subject nature and a luxury hotel in the heart of Mayfair might not be obvious, but by looking at the history of the neighbouring Hyde Park, you see that these are indeed delicate nods to the history of the area, as Hyde Park was originally designed to provide royalty with somewhere to hunt. Around 900 years ago, the area that became Hyde Park was owned by the monks from Westminster and was part of the Manor of Eia. Deer, boar and wild bulls would have roamed around the meadows dotted with trees. In 1536, the manor was seized from the monks by King Henry VIII. Some of the land was sold, with the remainder turned into a vast hunting park, stretching from Westminster all the way to Kensington.
A fence was erected round his new park and the Westbourne Stream, which crossed from Hampstead to the Thames (and is now underground), was damned to create drinking ponds for deer in the park.
Henry entertained ambassadors and dignitaries with royal hunts he organised, and visitors watched from grandstands before enjoying great feasts in temporary banqueting houses.
Queen Elizabeth I continued the tradition of hunting in the park, and would also review her troops in the flat area of ground next to Park Lane that was used as a parade group. The park would remain the same until Charles 1 became king in 1625, when he created something called the Ring - a circular track around the park where the royal court could drive their carriages. Today, Hyde Park is one of London's most beautiful outdoor spaces, with meadows, art galleries and sports facilities creating the perfect place in which to enjoy the outdoors in London.

CHEF
Executive Sous Chef Mario Perera is no stranger to catering for some of the most important people in the world, having cooked for the Queen and various heads of state over the years, and he knows exactly how to cater for the range of discerning tastes of every Four Seasons guest. Born and raised in Sri Lanka, Mario first realised his passion for cooking at an early age when, at 9 years old, he cooked a meal for his family while his mother was ill in bed, using tricks he had taken in watching his mother in the kitchen every day. After studying classical techniques at college, Mario honed his skills at a 5-star hotel in London, rising from 3rd commis to 1st commis, before joining Four Seasons Hotel London at Park Lane. Mario's combination of Sri Lankan upbringing, love of Asian food and classical training means he is able to create truly bespoke menus for Asian weddings and events. He particularly likes taking authentic Asian street food and transforming it in to beautifully presented, visually striking creations that remain faithful to the evocative Asian tastes and flavours.

10Th FLOOR LOUNGE
At most hotels, the top floor is reserved for penthouse suites, while fitness centres and spas tend to be hidden in the depths of the building. Not so at Four Seasons Hotel London at Park Lane, where old ideas and conventions have literally been turned on their heads. Introducing the 10th Floor Lounge, a great idea that's time has come. Adjacent to a sumptuous Spa and a high-tech Fitness Centre, with windows opening to London's best views is a unique, multi-purpose space. By day, it's a relaxing spa café, and as night falls, it transforms into a chic room for private receptions, complete with its own balcony open to the stars. As the sun rises the following morning, the 10th Floor Lounge becomes a haven for weary travellers.
Frequent fliers know that overnight flights may get you there in good time, but they can also leave one tired, rumpled and cranky, especially when check-in time is hours later. It's a different experience at Four Seasons, where early arrivals are whisked upstairs to relax and rejuvenate.

INTRODUCING THE SMART ROOM
More than simply a place to sleep in a strange city, a great hotel room can be a home away from home, where every need is thought of, and every comfort offered. At Four Seasons Hotel London at Park Lane, the latest technologies provide a setting that makes a business trips more productive, and leisure stays more enjoyable. It begins with an ergonomic chair pulled up to an extra large desktop that accommodates today's myriad laptops, iPods, iPads and phones. There's no more crawling around unplugging lamps to access more power, because data ports and WiFi connections are within easy reach, and power supply is adaptable to European and North American voltages. Next to the nightstand, there's another power outlet to keep your phone or BlackBerry handy while recharging. Even the in-room safes have power outlets, so that laptops can be charged while stowed away. As for the place to sleep – it's a Four Seasons signature bed of course. 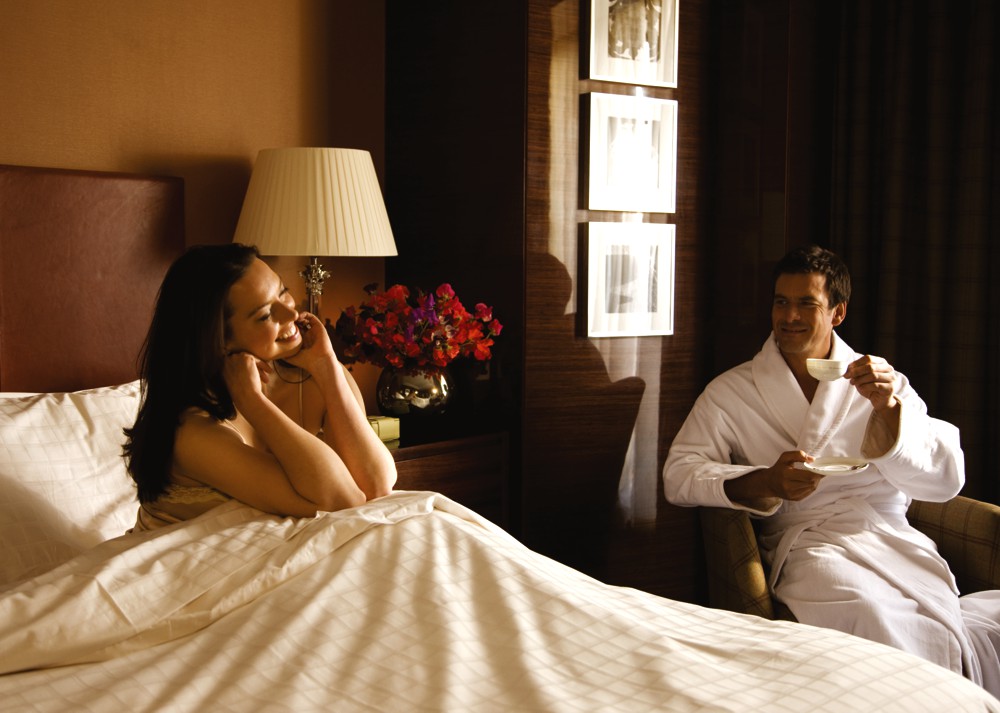 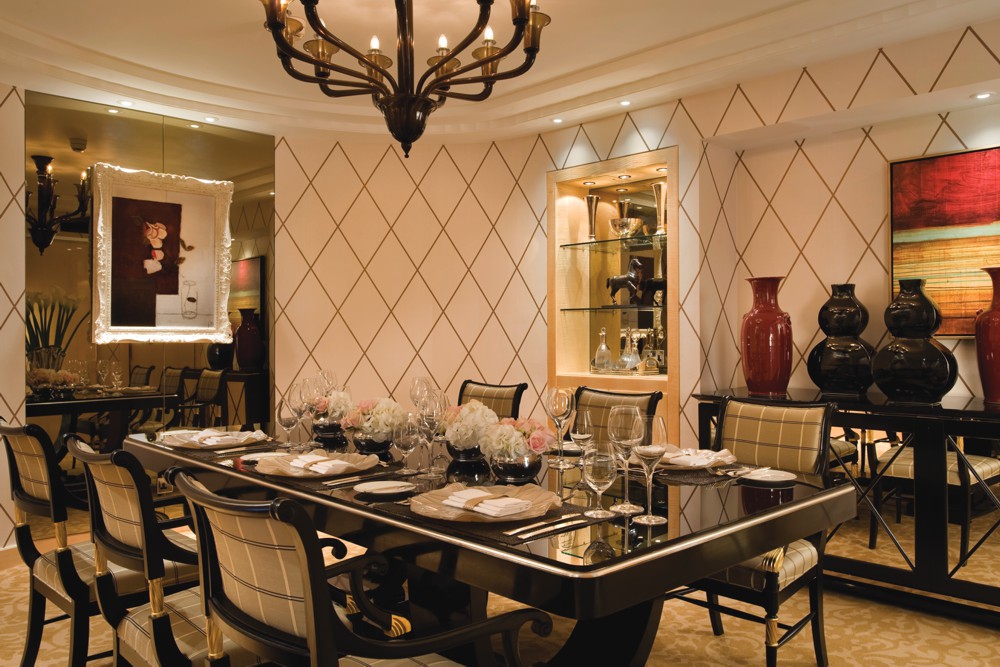 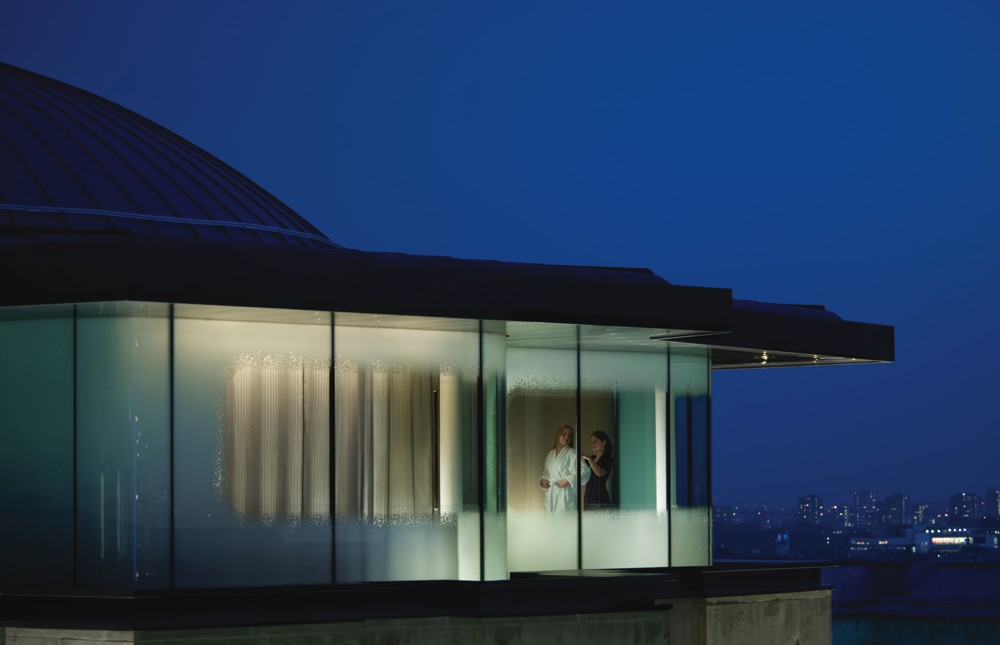 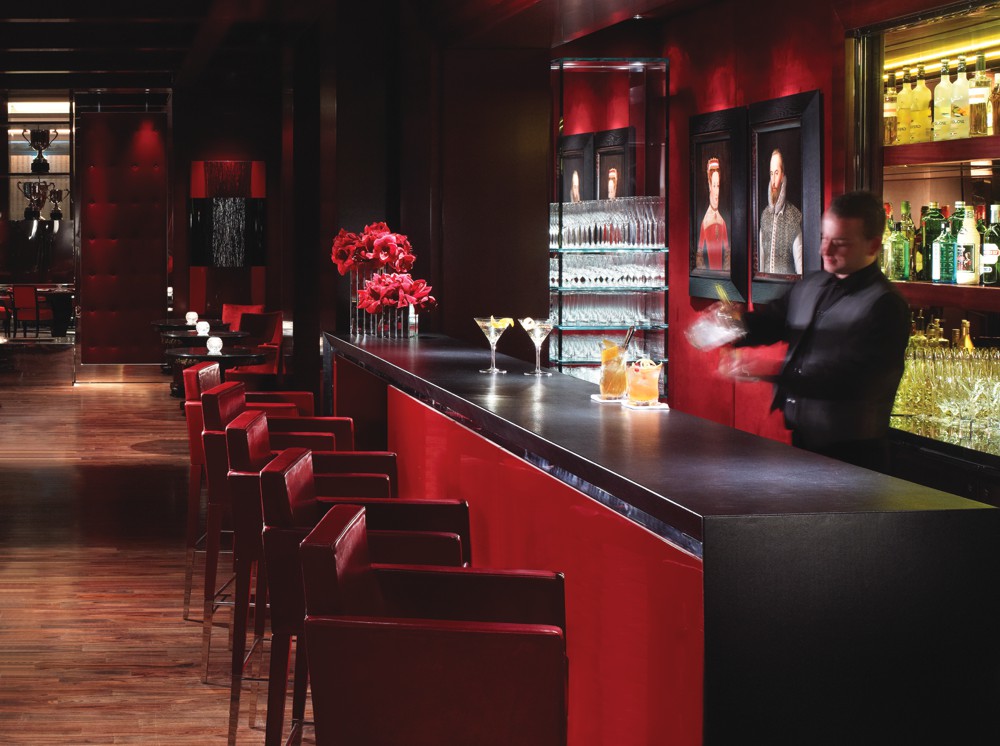