Of mixed and Mediterranean descent, Bruno Catalano was born in Morocco in 1960. In 1975 he was forced into exile with his family. Having landed in Marseille with the hope of starting a new life, he retains in his memory the pain of his own uprooting. At 18 he became a sailor, then an electrician; at 30 he encountered art and clay sculpture through artists such as Rodin, Giacometti, and César. From that moment he decided to devote his existence to sculptural art. His art evolved from clay to bronze and he sculpted larger and larger figures, thus achieving remarkable technical feats.

In his series ‘Les Voyageurs’, bronze bodies have been carried with a boat to stand at the entrance to the Arsenale, amongst other places in Venice. The figures of these unfinished men and women, cradled by the frenetic rhythms of modern life, merge into the surroundings around them: their absences become whole with the often overlooked places of the present moment. As they carry pieces of their past as their luggage, their bodies remain torn by the separation and exile from a place in which they were rooted. Situations are contrasted with destinations, stillness with migration, emptiness with openness, nothingness with richness. 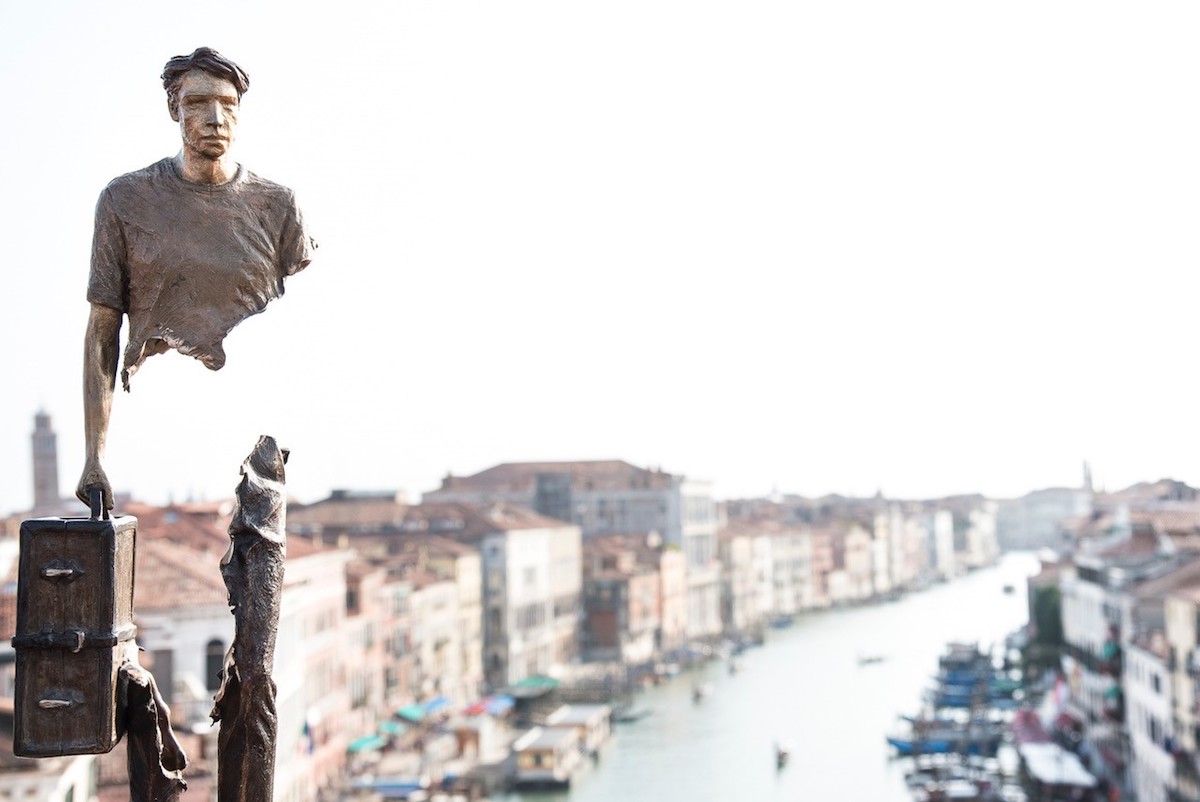 What has inspired your series ‘Les Voyageurs’?

I think it is mainly my family history, the transgenerational transmissions, which inspired this traveller series. Indeed the Catalanos were originally Spanish Jews who were expelled in 1492 by Isabella the Catholic, and then emigrated to Sicily. My grandfather left Sicily to settle in Tunis and later in Morocco. Then in the 1970s, my whole family left for France. In several generations, we have circumnavigated the Mediterranean.

I believe that above all, it is the fact of having been uprooted that has a direct relationship with my work. I had this significant experience of exile: having to leave your country leaving almost everything behind. My sculptures represent the significant moment when you have to leave, suitcase in hand, and you have to move forward despite everything.

What does the absence of your statues translate to, in your own life?

The absence of the body but, above all, the gesture of tearing, a fundamental part of my work which I perform on each sculpture at the wax stage (just before the stage of fusion) thus making each copy unique, since each tear is different. The tear reminds me of someone who is not in his right mind, who has pain in him. To burn, to tear: these are words that were often used in my youth in Marseille.

I think that absence, dearth, separation are constituent elements of any identity. People often ask me about this absence, but few speak of the suitcases that accompany each of my figures: only the loaded suitcase creates a connection between the head that thinks and the feet that walk. It represents the weight of experiences, memories, and very personal things like remorse, regrets. It also reflects an attitude: taking your suitcase and leaving also means knowing how to be courageous and determined. 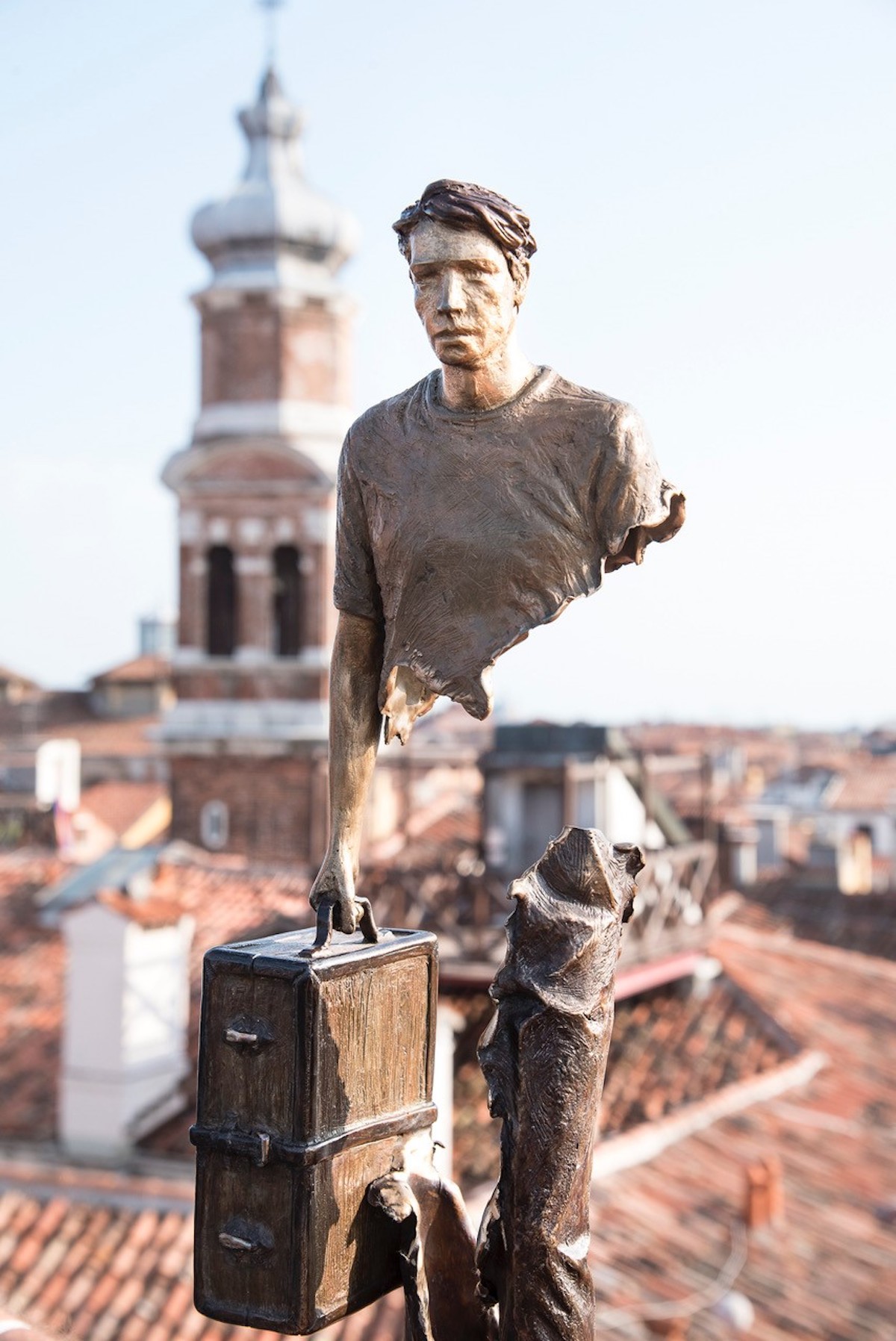 Travel has been an essential part of human culture, particularly across the Mediterranean. How can this enrich us?

I think that travel, and immigration, is a source of benefit, innovation, dynamism, work and cultural openness in the world. It also allows us to become aware of the problems of many countries in the world, to develop empathy, curiosity, the ability to listen.

‘It’s not about the destination, but the journey.’ Do you agree?

Yes I quite agree. I think the path is more interesting than the destination, especially the detours and the failures. My first traveller sculpture happened by “accident”. Twenty years ago, I started sculpting full men walking with a suitcase in their hands. One day, when I was casting a sculpture in my studio with the help of my neighbour (at the time I had transformed my apartment into a small foundry, which is strictly forbidden today), it broke.

The next day I had to participate in a small art fair in Aix en Provence in France, so I decided to repair this broken sculpture by welding the top and bottom together with a suitcase but keeping a hole in the middle. When I saw the result, I immediately knew that my next years of work were going to be devoted to this. When I presented the sculpture the next day at the show, it sold immediately. 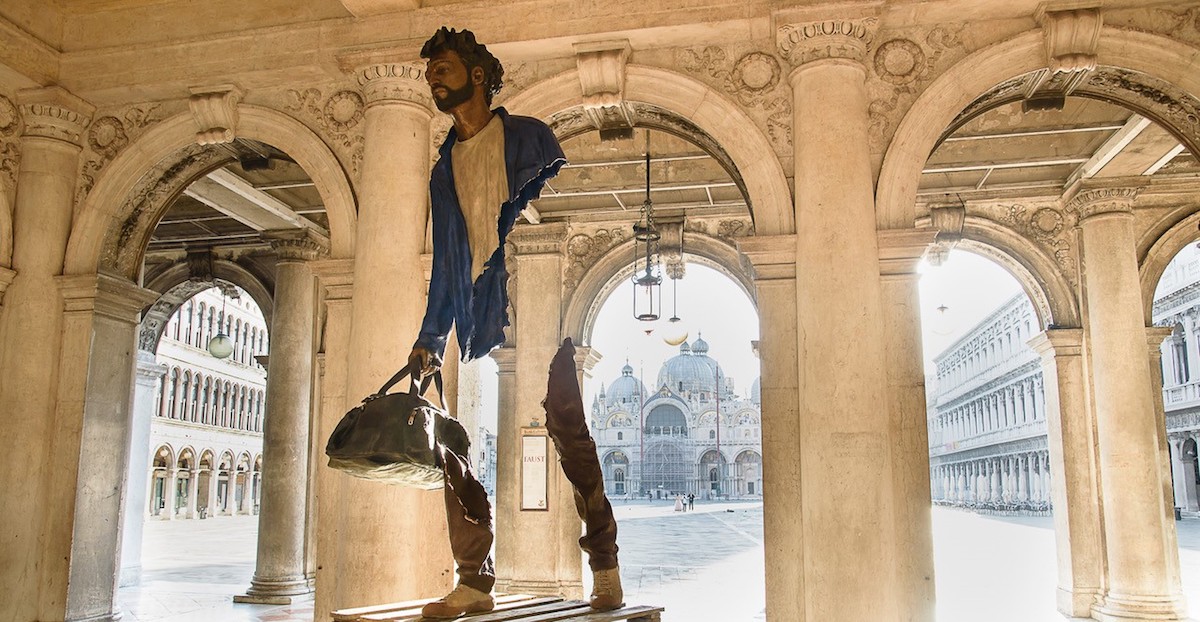 How to you find rootedness in the rhythm of modern life?

In truth, I am very solitary and, as I work a lot, my whole life revolves around my work, the people I meet often become traveller models, I have very few friends and I rarely go out. Being self-taught, I quickly realized that I had a lot of work to catch up on and that I had to do more than the others. This rhythm of work has remained the rhythm of my life.

I once read an ITW by Isaac Asimov that said: "I write for the same reason that I breathe, because if I didn't, I would die". It may seem a little romantic or presumptuous but that is really what I live and feel with sculpture. As a result, I don't have the feeling of living in a more "modern" life than 30 years ago, I do exactly the same things (apart from using my smartphone). Even my way of sculpting is not modern: I actually represent the modern characters of our time, but using a very old artistic method which is bronze. I don't think I'm rooted in "a modern life" but rather I am rooted in my values.